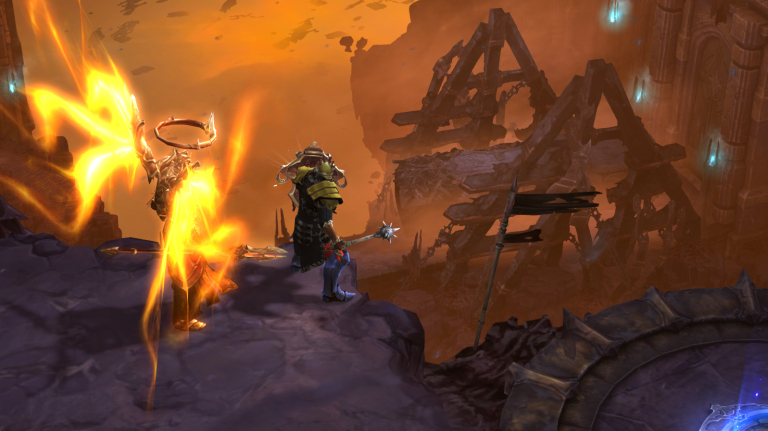 Diablo 3: Reaper of Souls | The Review

I haven’t played Diablo 3 in a long while. When it first came out in 2012, I wrote about how much I enjoyed the solid, cramp-inducing gameplay, despite the weak storytelling. I went through the game a few times with my Barbarian and again with my Wizard, generally having a good time sticking it to the foul demons of Hell. And then I moved on to other games.

I had not been following the Diablo 3 scene until last weekend. I knew that the expansion was out and I knew that there had been a number of improvements, so I decided to pick up Reaper of Souls and give it a try.

The first improvement that caught my eye is the inclusion of the Crusader class. The Crusader behaves similarly to the Paladin in Diablo 2, with powerful auras (called Laws), holy magical attacks, a beastly shield for both defense and attack, and a severe attitude. Severe as in stern and terse, unfortunately.

For whatever reason, I very much enjoy the sword and shield gameplay, so I decided to give the Crusader a try.

Two words: Shield Bash. The Crusader’s first right-click ability charges at an enemy and then unleashes a powerful shield strike. Essentially it is a combination of a distance closing ability and a nuke ability.

Like the stock version of Diablo 3, Reaper of Souls allows you to customize your abilities with runes. One of the runes that I used for with Shield Bash is Shattered Shield. Shattered Shield gives your Shield Bash a nice cone of damage. It’s hard to describe, but using the ability just feels great. It’s a good damage and just plain fun. The combination with a charge makes it handy for keeping those kill streaks going, too!

But sadly, you cannot only cast that one ability throughout the entire game. Using the ability costs the Crusader some of his resource, holy wrath. You generate wrath by using your standard left-click ability. I chose to stick with the starting wrath generator, Punish, for most of the game. Punish does a nice chunk of damage to a single enemy in melee range, but has the advantage of buffing your blocking ability, which synergizes well with Shield Bash. 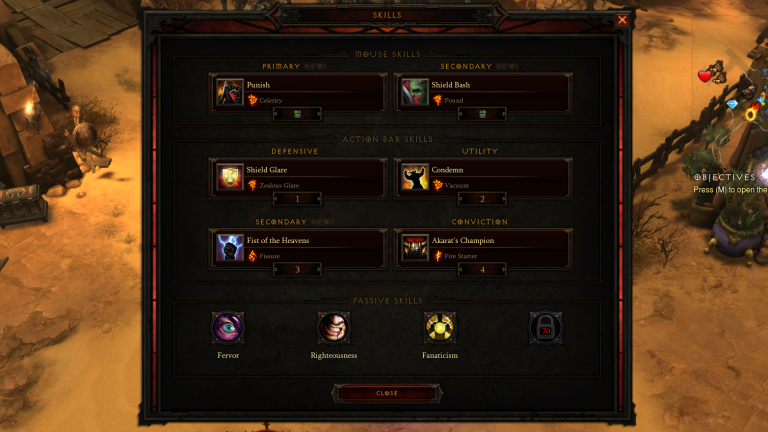 Playing around with different builds is half the fun of Diablo 3.

Reaper of Souls keeps Diablo 3’s skill system: you slowly unlock new skills and runes for those skills as you level up, and you can give your character any combinations of skills that you’ve unlocked (NOTE: You’ll need to check your game settings in order to do this. By default, the game only lets you pick one skill from each skill group). Basically, Blizzard didn’t fix what wasn’t broken.

The skill system is easily one of my favorite parts of the game. The number of skills per class is impressive, and each skill has a number of runes that affect how the ability performs. This allows a lot of flexibility in choosing how you want to approach the game.

Mixing and matching skills to try and find combos is still about half the fun of the game. For instance, on my Crusader I decided to use Condemn with the Vacuum rune, modifying the player-based area of effect spell to suck enemies towards me before exploding. I then combined Shield Glare, a cone blinding ability, with Divine Verdict, which amplifies damage to blinded foes. Mix all of this with the Shield Bash I mentioned earlier and it’s quite a nice combo. I charge into a pack of enemies, hit Condemn to suck them all into a nice clump, hit Shield Glare to stop them from attacking me, and then unload a Shield Bash or two while waiting for Condemn to explode. Bodies then fly away from my hero in all directions. It’s marvelous fun.

The Crusader also has a couple of ranged wrath generators as well, if you find yourself so inclined. These would work better with builds that want to keep the enemy at arm’s length and pelt them with holy fire or one of the character’s electric attacks. 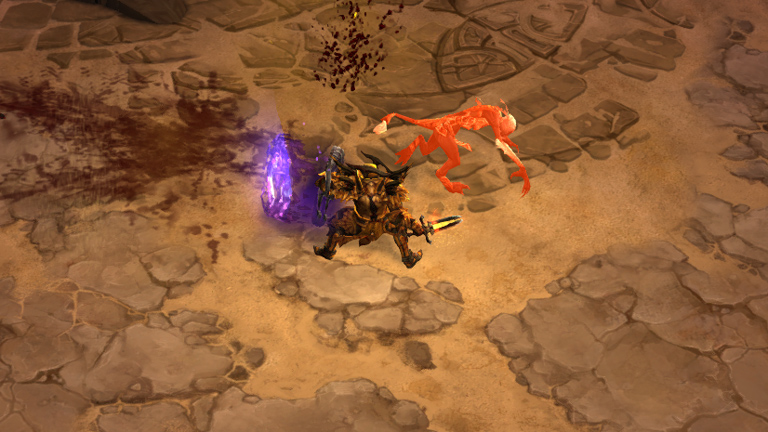 Shield Bash is so, so satisfying.

I enjoyed my days helping out the Crusade. The male Crusader’s voice acting is rather dry, dull and stereotypical, but gameplaywise there’s a nice combination of melee and ranged attacks to choose from.

Treasure chests in place of buyouts

One of my biggest concerns with Diablo 3 was its inclusion of an auction house.

Let me rephrase that: one of my biggest concerns with Diablo 3 was its inclusion of an auction house and the balancing of the game around the assumption that players would want to spend their time using it to get an edge in the game.

The problem with the auction house is that it created a situation where I was no longer excited about getting new items for my character in the game itself. Most of the items I would find I couldn’t use and would instead post them to the auction house to be sold, using the money to buy a new weapon or piece of armor.

I missed the times when I was actually excited about opening a chest to see what it had inside or what a boss would drop from… wait, where do the bosses keep all that loot anyway? Probably best not to think about it.

In any case, all of that is gone. The itemization is now much more intelligently done. Rather than being able to use a small percentage of the items, many (but still not most) of the items my character found were usable. This is not to say that every item is an upgrade or even a sidegrade, but a very small percentage are completely unusable.

All of this makes killing bosses and looting chests much more exciting, with the chance of [usable] loot lurking inside every level.

I can’t say anything great about the new act of the story. It is short, bland, and revolves around stopping some rogue angels from killing all of the humans in the world, because apparently humans were created with the essence of both demons and angels, and the rogue angels are freaking out about it. The story as a whole is rather forgettable and contrived, and told through a combination of in-game dialog, hand-drawn journal movies, and full-blown CGI movies.

One thing that I can say about the art direction is fairly solid, especially with the level design. You get to see a couple of great areas. My favorite being the cramped, corpse-filled streets of Westmarch. I found this area enjoyable because the square blocks of the city make it feel very different from other zones in the game, which are often out-of-doors. The city felt much more like some of the corridors in earlier Diablo games. 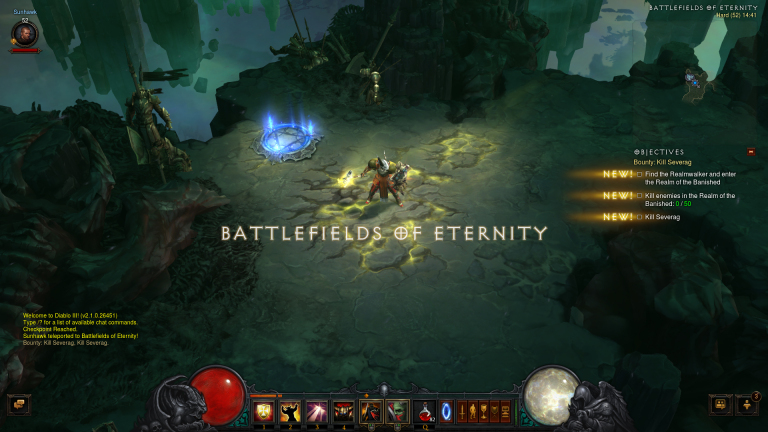 I love the art direction of the Battlefields of Eternity.

The Battlefield of Eternity is another of my favorite of the new lands. It reminds me of Shadowmoon Valley from World of Warcraft: everything is painted with a dark ash grey or a sickly green. The whole area feels… wretched. It’s probably my favorite zone in the game as far as art direction goes, and its use of siege weaponry (read: a battering ram) is the most memorable part of the new act. 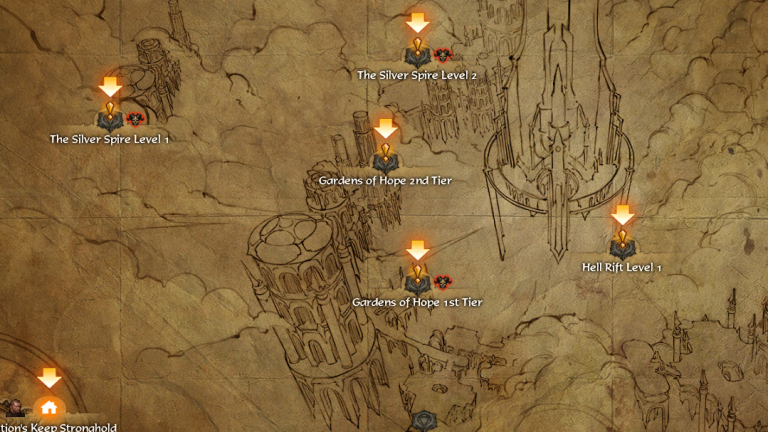 I’ve only played a handful of adventures so far, but for the most part I’ve enjoyed them. The one thing that does irk me a bit is that while you are able to teleport to the general area of the encounter, often you have to run around just to find the hidden cave or abandoned warehouse. Given the size of Diablo 3‘s maps, this can take a while. Luckily after a time a helpful arrow will appear on your map to point you in the right direction.

I suppose I was hoping that adventure mode would have some additional randomness to it. One of the things that made me sad about Diablo 3 is the reduction of randomness of the maps. Still, adventure mode is a nice way to stay focused on killing demons and getting a nice boost to your level to boot.

Have you ever had that moment where you’re playing an RPG of some sort and you find a totally kick ass weapon or piece of armor. Its stats completely blow what you’re wearing out of the water. You squeee with excitement as you replace your old drab with the new hotness… only to be absolutely horrified by what the “new hotness” looks like in game.

Now you are left with a terrible, terrible choice: do you go with the new item that is statistically better than your current one, or do you stick with your old piece of junk, hoping that the next upgrade will not look so hideous?

Reaper of Souls has a solution for you, lifted right from World of Warcraft: transmogrification. 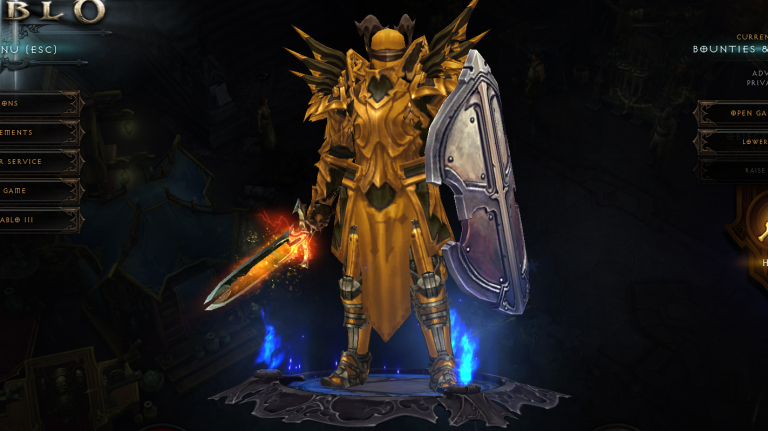 That’s not actually a badass sword that I’m holding. It’s actually a club that looks like a cheap baseball bat. Behold the miracle of transmogrification!

Transmogrification allows you to change what an item looks like, without changing any of its other attributes… for a price, of course. Now you can have a weapon that dispatches demons with ease and look great while doing it. You’ll unlock new models for your weapons by paying to level up the transmogrificationist in town or by finding legendary items throughout the game world. You may not want an item for its stats, but you may want to hunt it down for its sexy look. It’s a relatively small change, but it’s nice for those of us who want to tweak the way our characters look.

Reaper of Souls isn’t going to blow your mind. It offers some good enhancements to the solid Diablo 3 formula, but if you are expecting anything other than more of the same, I think that you may be sorely disappointed. And I think that’s perfectly fine. It’s an expansion pack, not a full-blow sequel.

The new class is fun, the new areas are well-made but short, the additions to the story you will forget after fifteen minutes, and the new game mode and difficulty levels add work to break up the tedium of leveling a character. The loss of the auction house is much welcomed, as are the balance changes that came with its demise.

With a hefty $40 price tag though, I wouldn’t recommend it to anyone who didn’t enjoy the original Diablo 3, or who doesn’t like dungeon crawling games, or anyone with a weak wrist. However, if you are looking for a great action dungeon crawler, Diablo 3 is still the game to beat, and Reaper of Souls expands upon it.