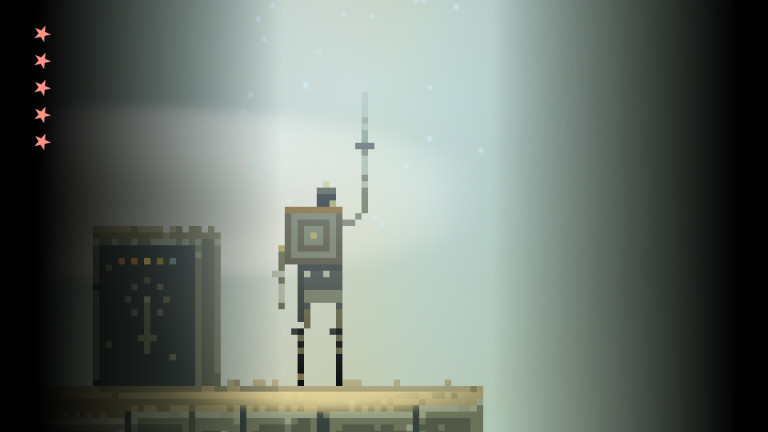 A couple of days ago I had the pleasure of playing the first part of Superboys: Sword & Sworcery EP. It is an indie-musical-otherworldly-adventure game. Is that a genre? Well, it is now if it wasn’t before.

You play an unnamed adventurer armed with a trusty shield and sword. You character is composed of about 100 pixels and I think your character is female, though it seems ambiguous. You interact with the world exclusively with your mouse. Most of this interaction is moving throughout the world, but there are also artifacts to investigate (which are explained through humorous captions) and even a few enemies to battle.

Combat relies on some quick clicking.

The battle system in the game is also relatively simple. Your hero faces off against an enemy who will move to attack at somewhat regular intervals. You’ll need to time your block or attack by clicking on the shield or sword icons at the bottom of the screen. It is a super simple method, but I thought that it fit the relaxed mood of the game.

Channeling my sworcerous powers to produce... a double rainbow!

In addition to beating the snot out of enemies (and running for your life at least once) you will also find yourself casting “sworcerous” spells. When casting spells you are actually solving puzzles. You kneel, begin channeling the spell, and click on objects in the environment, which will then ping and glow if you chose the correct objects.

While beautiful and fun to tinker with, I found it a bit frustrating because the puzzle logic isn’t always clear. One puzzle had me casting sworcery on a flock of sheep, but I couldn’t figure out what order I had to click on them. Luckily, this frustrations were minor and did not detract from my overall experience. Plus, a little struggling is good.

The magic of the 21st century

An in-game bird sanctuary prompts you to do a bit of tweeting on behalf of the game.

Completing puzzles and observing objects in the world gives the player the option to tweet pre-fabricated tweets. These are mostly written in the first person plural: “We were like groan not another fetch quest amirite?”

For most games, I don’t know that I would ever think to tweet my progress, but here I made an exception for two reasons: first, the game is quite good and I wanted to support the game developers by giving them a bit of free advertising; and second, the dialog to be tweeted was so cryptic and bizarre that anyone who read it would most likely be totally confused, and it’s fun to mess with people. Plus, I loved the way that the captions acknowledged the “we”-ness of gaming; the union of the character and the player.

Keeping it on the low-fi

You end the first chapter by acquiring the mysterious Megatome. What secrets may lie inside?

Graphically the game is a major throwback to the early iterations of King’s Quest. The characters are pixelated to the point where they are barely discernible. While pixelated, the world is still well imagined and fun to explore. The game interface itself is actually hi-resolution, so the contrast between the smooth quotes and menu buttons and the pixelated world and characters draws the attention to the fact that one is playing a game. The low-fidelity of the graphics also made it easier for me to focus on the best part of the game: the music.

The mystical stag and the dancing bear will both flee when you approach.

The music binds the whole experience together. Each track feels a bit different, but they all have an otherworldly, ethereal quality to them, reminding me of the music in the old Ultima games.

But the music is just one part of the great sound design. Moving during moments of silence treats you with muted footfalls. A storm brings the pitter-patter of rain. Clicking on bushes causes the leaves to rustle. While channeling sworcery, clicking on objects or just waving the mouse around produces lovely chimes and angelic voices.

First Session of the EP

"Run away! Run away!" Animal skull and bone hands. *shiver*

The first session took only about fifteen or twenty minutes to complete. When I completed the first session, the game encouraged me to take a break and come back later. I actually really liked that, particularly for a game that relies so much on mood. I’m not sure how many segments the game has, but I hope that it keeps on being a treat to play.

I continued playing with the second session, and it maintained its charm. The game is so daring in its design, following its own path and I have to admire that. There is an odd juxtaposition of the hi-fi music and audio design with the low-fi/retro graphical style that makes me feel warm inside. But I think the greatest part about Superbrothers: Sword & Sworcery is that it recognizes it is a game, and games are meant to entertain us and make us feel good. And what I’ve played so far absolutely succeeds in that.