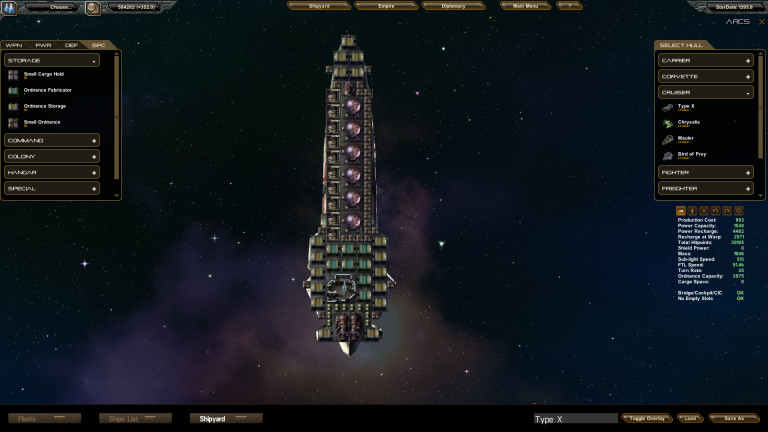 StarDrive | Conquer the Galaxy with the Fleet of Your Dreams

Who doesn’t want to conquer the galaxy? Zero Sum Games’ new RTS StarDrive gives players the chance to explore, expand, exploit, and exterminate their way to galactic domination. But are its engines fully operational?

Nothing gets my blood pumping like the thought of conquering the galaxy. So naturally I was quite excited when I learned that there’s a new game 4X space empire-building game in town, and that game is StarDrive. The game is currently available on Steam, but I should mention that the version that you get is still very much a Beta, and still in active development.

You start out with a single planet and a tiny fleet of scouts. Soon however, you’ll be exploring the stars, researching new technologies, colonizing alien planets, building fleets, negotiating with aliens or simply blasting them into oblivion. Unlike other 4X games such as Civilization or Master of Orion, the space opera of StarDrive unfolds in real-time. It plays a lot like Sins of a Solar Empire. And that’s a good thing.

As you begin to explore the galaxy you’ll find planets, competing alien civilizations, and occasionally even trigger story events. Deciding where to colonize is critical to your empire’s success. Planets are rated with Fertility, how easy it will be to produce food, and Richness, how easy it will be to build ships and additional planetary facilities.

One part about the colonization process that I enjoy is the fact that you can create freight ships that will ferry food, production, or colonists from one planet to another. This allows you to jump-start planets by giving them more resources than would otherwise be available.

It also allows you to specialize planets for food, research, or production. I only wish that the colony specialization went ever further, so that there was an even greater potential for strategic play: do you make each of your planets self-sufficient, or do you make your empire as a whole more efficient at the expense of being vulnerable to raids on your freight?

As it stands, there are only a few structures that your colonies can build, and while some of them have are only useful on a food or production planet, many of them you’ll find yourself building on every colony. Because of this, it becomes somewhat tedious when managing an empire on the game’s larger galaxies. There are a number of preset governors for colonies, but I found that sometimes they make odd decisions. I find myself wishing that I could set up build orders for various colony types.

While I find the colony management portion of the game somewhat lackluster when compared with other 4X games, StarDrive dominates the competition when it comes to the fourth ex, exterminate.

This ship will probably explode if someone sneezes on board.

What got me most excited about StarDrive is its ship customization.

Ship customization consists of two main parts: chassis and modules. The chassis is a layout which determines what types of components can go where. Modules are placed on the chassis and give your ship its combat statistics. Each chassis is represented as a series of squares with each typed as Outside, Inside, Inside/Outside, or Engine. Because of this typing, you can’t put your engines where your armor should go.

All of this is important because your ships’ abilities are determined entirely by what components you choose. Do you want ships with lots of missiles? Or ballistic weapons? Will you prefer heavy armor or more speed? All of these decisions will impact how potent (or useless) your ship will be on the battlefield. And it is perfectly possible to make ships that, quite frankly, less useful than space trash.

If laying out where the electrical wiring is on your ships isn’t your thing, the game will also provide you with some generic ship designs that you can use in your battles. But if you do choose to design ships on your own, be warned: the AI will use your own designs against you in future games!

I find that the real-time nature of the game makes combat much more enjoyable than other 4X games. Fleet battles are a sight to behold: missiles flying every which way, lasers lighting up space, and ships exploding in glory. Plus, you can speed up the game during periods while waiting for an important technology to finish researching or while your fleet is refueling, but then slow it down again when things start exploding again.

But maybe you don’t have to kill everyone you meet.

“We are the space bears. We also like poetry.”

Before you even get into the game, you will need to decide on which species to play as. You might choose the Kulrathi Shogunate, warrior-poet space bears (not making this up); the Human United Federation (capitalist pigs); the Ralyeh (death-obsessed face octopus people); or perhaps the Cordrazine (stalactite oysters that have enslaved a race of cute creatures known as the Owlwoks). This decision impacts two things: your fleet’s general aesthetic and the layout of your ship hulls for customization.

By default, your choice of species will also give you a default set of physiological, sociological, and historical traits that affect gameplay in the form of minor bonuses and penalties. For instance, the Savage trait will make your ground troops more powerful, whereas being Industrious makes your planets able to produce 35% more stuff.

If none of a species’ starting bonuses floats your boat, then you can customize the bonuses and penalties using a point-buy system. Positive traits have a cost related to how powerful they are, and negative traits give you additional points to spend.

You do not have to spend the points though, so it is possible to create a purposefully weak species in order to up the challenge. I tried taking every negative trait a few days ago and needless to say, it was bad. I could not even get my first colony to be profitable and the game promptly ended in defeat.

Planetary invasions are mostly automated and victory involves sending more troops than the other guy.

The diplomacy aspect of the game feels somewhat underdeveloped. There are the usual options of trade negotiations, peace treaties, declarations of war, and technology trades, but there isn’t anything really new or exciting in the diplomacy department. The only exception to this is the option to join into a Federation with another species, which is game lingo for you taking over their entire civilization. The AI will often merge civilizations in the late game if you start getting too powerful. Overall though, I found the diplomacy options a bit limited for my liking.

That said, the negotiation screens are beautifully animated and the species’ unique dialog and theme songs give each species a unique flavor. It is highly reminiscent of Star Control 2, which is pretty much my favorite game ever.

While perusing the game’s official forums I discovered that the developer has stated that multiplayer is a highly requested feature and will probably be added in the future. I hope that this is true, as it would be an awesome to go conquer the galaxy with a friend (and then turn on them at the last minute, of course). Again, the real-time nature of the game makes multiplayer much more appealingBut for the time being, you’ll have to go about your conquering all alone.

To me, StarDrive is a game with enormous potential.

I know that some other reviewers have mentioned frequent and game-breaking bugs, but I’ve played several full campaigns and not encountered any. It’s not that the game is buggy or that it is bad, it just feels unfinished. The colony management is tedious, the diplomacy is uninspired, and the game doesn’t feel as deep as something like Civilization.

That said, the ship customization is a blast (sometimes literally, if you don’t protect your power plants!) and I would gladly pay for a stand-alone battle simulator a la Gratuitous Space Battles or even something resembling the Super Melee in Star Control 2. Hopefully Zero Sum Games will continue to improve the game and that it develops the following that it deserves.