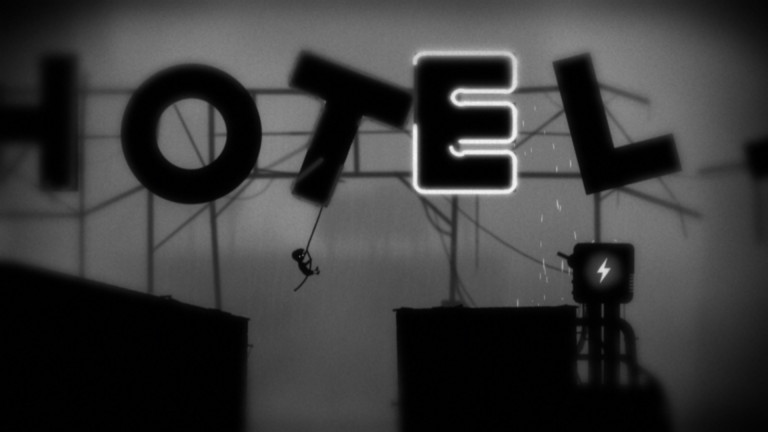 Even Limbo needs cheap hotels. And yes, touching the lit up letters will kill you.

I can say without a doubt that LIMBO is amazing and one of the most beautiful works of art that I have ever had the fortune to experience.

Have you heard of a little game called Braid? It’s a platform puzzle game that came out a couple of years ago and made quite a splash. In short, it rocks.

Limbo has a wide range of landscapes ranging from forests to urban industrial areas. My favorite are the forested areas.

If you liked that game at all, either for the clever puzzles or the mood of the game, its interspersed poetry and visual flair, you may want to check out LIMBO, developed by Playdead and published by the same company in August of this year. Whereas Braid has the feel of a bright and colorful wonderland, LIMBO takes you into a land of shadows and eternal twilight and, in my humble opinion, rivals Braid‘s brilliance.

These guns will spin up and fire after a couple of seconds. Yes, they can kill you.

The plot of LIMBO (the game) is simple: you are a young boy who must venture into Limbo (the place) in order to find his sister. However, the plot isn’t present in the game very much at all; I only know this because I read the game’s description on Steam. As far as the player is concerned, the only objective is to continue solving puzzles. The main character is a silhouette with two eyes. That’s it. You have no voice, no name, and no personality aside from perseverance. It reminds me of Where the Wild Things Are in the sense that it is the story about a boy adventuring in an unknown land (with a nearly identical sailboat motif at the very beginning of the game). The character design is similar to the style used to depict spirits in Spirited Away, though in LIMBO they have a more solid form.

Not everyone gets out of Limbo alive.

The game is dark, and I don’t mean just in terms of the color palette. Corpses of other travelers litter the game world, so expect to come across them hanging in trees, in cages, and floating in ponds. Despite the child protagonist, this is not a children’s game. Your spine will tingle more than once. Arachnaphobes be warned: you are stalked by a giant spider for the first quarter of the game.

Spikes are sharp and jumping into them ended badly for me.

Gameplay wise, Limbo is seemless. There are no levels. There is no dialog to break up the action. You just keep trying to get as far to the right as you; the landscape changes from a lush forest to a murky swamp to an industrial complex without any bravado. Once you begin your game there is nothing but you and the puzzle. There isn’t even any interface: no score, no lives remaining, no acknowledgement of checkpoints or hints that certain items are movable. This makes for such a pure experience; you never are thinking about LIMBO as a game, but rather as an adventure. You want to keep going to the right just to see what’s over there. It’s a treat.

How am I supposed to get this box out of there? Could it have to do with gravity?

The puzzles are mostly simple logic and physics problems. You’ll push boxes, climb ropes, power magnets, walk on the ceiling with gravity-reversing devices, jump over spinning saws, and get impaled by a giant arachnid (probably). The total number of objects and actions in the game is relatively small, but the level design is clever so that the puzzles feel fresh throughout. I never felt like I was solving the same puzzle over and over, a feeling that I got when I played Braid and The Misadventures of P. B. Winterbottom. Just when I thought that I had LIMBO figured out something new came up that made the game exciting again, whether this was changing the rules, adding in a new mechanic, or mixing the mechanics in a creative manner.

Sometimes you'll even end up walking on the ceiling.

This feeling of freshness may also have been due to the brevity of the game. I’m not a big platform or puzzle gamer, and I was still able to complete it in about 4 hours. I died a lot. I got stuck to the point of being frustrated perhaps 1 or 2 times. But the game was still a bit on the brief side.

Most of the puzzles can be solved via trial and error. Death is frequent but non-punishing; at worst, you’ll have to replay perhaps 20-30 seconds of a puzzle. The game automatically saves at short intervals (about after each puzzle, though sometimes in between as well) and I never felt like I had to replay too much if I died solving a puzzle.

Deaths are heart-rending as you witness your character dying in a grisly fashion. Pretty much anything in the game can kill you: fail to make a jump over a pond and your character will struggle as he drowns; get cut by a saw and your character gets dismembered violently; switch gravity at the wrong moment and you can be crushed by falling box. If you are wondering, “Can this kill me somehow?” the answer is almost certainly “Yes.”

Limbo is absolutely beautiful to behold and to experience. The ambient sounds in particular are amazing. It’s easy to forget the ambient sounds in games as they are not the focus of the action, but rather added to enhance the atmosphere of the game. However, in LIMBO, I definitely noticed them. I think that this is in part due to the game’s infrequent use of background music, and also a testament to the quality of the ambient sounds: croaking frogs, wind blowing through the grass, the pitter-patter of rain. Wonderful.

Limbo is a shadowy land that is completely desaturated. The objects in the foreground are all solid black, with objects in the background becoming various shades of grey. The layering of the world is such that there were a few times that I thought that an object was in the foreground (and could be interacted with), but they ended up being in the background. For instance, once I tried to grab a rope and another time I tried to jump onto a background ledge, but these incidents were infrequent and didn’t bother me very much. I do wonder if the emotional experience of the game could have been enhanced by adding just a few, and I mean very few, splashes of color. In particular, I would have liked to have a couple of moments of horror (particularly with the natives of Limbo

Overall, the game is amazing. It is absolutely worth its $10 price tag and I highly recommend it. It is simple and accessible as an adventure, but the creators contrasted the beauty of game world with the dark themes that will haunt you long after the final credits.

P.S.: Part of the reasons this entry was so delayed was that I recorded some LIMBO footage and wanted to include it in the review. However, I encountered countless problems with it. It kept failing to encode properly and was basically a colossal failure. The YouTube upload kept failing on me and I wasn’t able to resume. Sorry guys, but I just need to get the review out the door and then work on the video later.