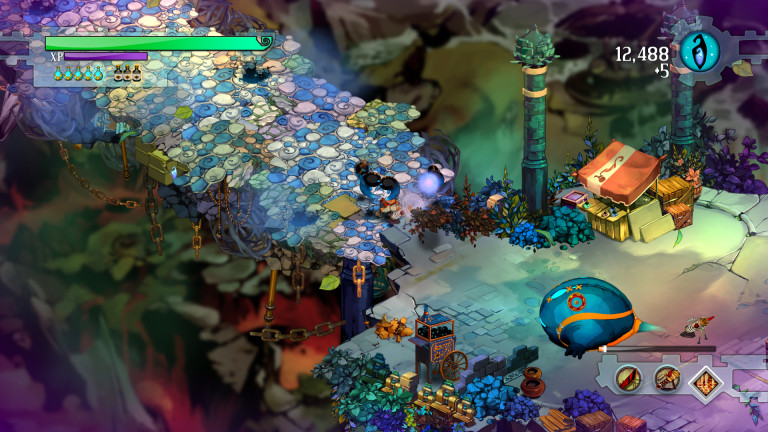 Bastion | Never has a landless game been so solid

Well... there goes the neighborhood.

Bastion is an action role-playing game from Supergiant Games, released in 2011. The player takes the role of the Kid, a hero who journeys across the shattered remnants his world, Caelondia, in an attempt to recover the Cores, powerful artifacts that could restore the damage done by the apocalyptic Calamity.

You'll begin every mission by falling on your face.

Normally I dive into the specific gameplay elements that make a game unique, that make it stand out among the competition, or what it borrows from the genre’s toolbox for tweaking. So what is all of this stuff about artistic merits?

Well, put simply, Bastion is a wonderful work of art. The graphics of the cartoony characters are in an anime-inspired style. The levels are littered with artifacts from before the Calamity, which help to reinforce the fact that people once lived in Caelondia. The colors throughout the majority of the game are vibrant and eye-catching, with a few muted areas to enhance the mood. The foreground and background art appears to be all hand-drawn and all of it is gorgeous.

Backstory for the environments is primarily given through narration.

The game also features something that is rare in videogames: constant narration of the player’s actions. This narration also tells the vast majority of the story. The narrator provides backstory on the particular zone that the Kid is in, or perhaps what the Kid is thinking at the time, or why he just did what he did; all of it one line at a time. For example, smashing things that you don’t need to causes the narrator to say, “Kid just rages for a while.”

While most of the story is told through in-game narration, there are a few still-image cutscenes as well.

The quality of the narrator’s delivery of lines is outstanding. The writing and story is only mediocre with a few (mostly predictable) twists and turns along the way, but the gravitas of the narrator makes up for this and made me want to keep playing. Basically, I want that voice actor to narrate my whole life.

While the narration and graphics are memorable, what really sets Bastion apart is its music, which is, quite simply, the most memorable of any game I’ve played in the last year. It is varied, ranging from little more than a husky voice and a guitar (with your mind providing the campfire) to intense string arrangements; it is really all over the place. The closest thing I can compare it to is Firefly. And that’s a good thing.

Rebuilding the World… One Step at a Time

The core gameplay of Bastion is that of an action RPG. You’ll come across a large number of enemies on your way to restoring Caelondia, and all of them need a good thumping.

The world has literally fallen apart, but when the Kid moves around, bits of the old world magically appear for him to stand on. It’s an odd effect at first, but you get used to it. Occasionally the level will begin to break apart as well, causing the squares to fall back down (taking the Kid with them, if you’re not careful). This effect serves an important gameplay function of automatically mapping the places that the Kid has explored, and emphasizes the frailty of the world.

The mortar is excellent against large and slow moving targets. Just don't blow yourself up.

Unlike pretty much every other action RPG out there, Bastion doesn’t use an inventory system. Instead, the Kid can bring any two weapons that he’s found into battle, conveniently corresponding to the left and right mouse buttons. Bringing the right tools for the job is an important tactical decision as some weapons are more suited for battling specific types of enemies. The Kid also picks a Secret Skill, a kind of super-powered attack that may or may not rely on his chosen arsenal.

I chose the sharp thing and the boomy thing.

Sometimes the Kid will find components lying around the world that will allow him to upgrade his weapons. Each upgrade forces you to choose between two benefits, but you can change your mind between levels.

Regardless of what weapons the Kid brings to bear against his enemies, he’ll still have a couple of moves to help him in combat, namely a killer shield block move that can send enemy projectiles flying back and a roll that allows him to get away from danger.

That brings me to an important point: the combat in Bastion greatly rewards skillful timing of attacks. For instance, the machete’s basic attack is a quick slash, but holding the button charges the weapon and prepares it to be thrown, and if the weapon is thrown at the exact moment as it is ready, you are rewarded with a Power Shot.

This makes the battles somewhat hectic but highly rewarding. I often found myself running around and dodging attacks while trying to pick off the weakened enemies before they regenerated their health. Other times I carefully moved forward, slowly picking off enemies at maximum range with machete throws and mortar shots.

Enemies in the game are plentiful and somewhat varied. You’ll run across ninjas, spiky vegetation, angry spirits, slimey blobs, hoppy toads, landmines, and anklegators, which are basically dinosaurs that attack from beneath the ground. You know that video that you’ve seen on Discovery where the crocodile jumps out of the water and grabs the gazelle?

You are the gazelle.

Level up! Bottoms up!

The distillery provides a place to set your brews, each with its own benefits.

Leveling up provides some benefits too. Whenever the Kid gains a level, he can put on another tonic on the shelf at the brewery… for real. Each tonic gives him some kind of bonus (such as increased health or damage), and a few of them have penalties to counteract their powerful effects.

Curse the Gods… Gain Some XP

What better way to make life harder than to curse the gods? Along his journeys, the Kid will come across idols of various deities which he can put on display in a shrine. Each shrine can be cursed, which causes that deity to empower the Kid’s enemies with stronger attacks, more health, etc, etc.

While buffing enemies sounds like a bad idea, the increased power of the enemies makes them worth more experience. All of this makes a fun approach to the game’s difficulty: the player makes strategic decisions about what idols to activate that will be the least dangerous to his or her play style.

Go forth, and rebuild the Bastion!

If you strip away all of the wrapping paper (and it is wonderful wrapping paper), you are left with a fun, solid action RPG, and one of the most endearing titles of 2011. If you do get the game, I recommend picking up the soundtrack edition. Seriously. Now, go out there and adventure, but do be sure to watch your step!