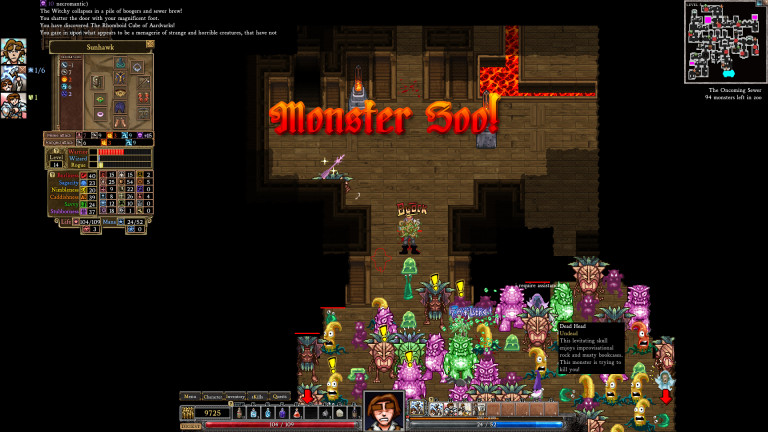 Dungeons of Dredmor | You find a bloodstained letter

[[In the dim torchlight you see a decayed skeleton huddled in the corner. As you move in to inspect it (well, let’s be honest here, to loot it), you notice that its left hand is still holding a crumpled up piece of parchment. Carefully now, you take the parchment from the skeleton’s grasp. Holding up your torch, you see following miraculously well-preserved images and words written in a block script: ]]

My name is Sunhawk and I am about to die. I don’t know why I came down here. It’s dark. It’s cold. I can’t remember the last time I saw the sun. I don’t think I have much time left; I’m bleeding from every orifice and I can’t even lift my hammer anymore.

I want you to not make the same mistakes that I did. But if you are reading this, then it is already too late for you. These Dungeons of Dredmor promised riches and fame, but all I found was death.

The troupe of Gaslamp storytellers came to my village last July, bringing tales of the Dungeons of Dredmor. Riches, wealth, artifacts of power, fame, sex appeal; they promised it all to the one who could defeat the evil Lord Dredmor. Ever since that sunny day, adventurers have been coming down to the Dungeons of Dredmor to seek their fortune.

I didn’t jump on the bandwagon to visit the Dungeons of Dredmor immediately. I saw all types of would-be heroes pass through the village: Warriors of Sword and Shield; Rogues skilled in Archaeology, Burglary, and Assassination; Mages of Blood Magic, Fleshsmithing, and Golemancy; and that was just the tip of the ice berg. I saw hundreds of adventurers with virtually every combination of skills go into the dungeon, but I never saw them come back out.

Some stroke of insanity drove me to test my luck at dungeoneering. I had always been handy with a hammer and shield and my Viking past made me revel in combat. I packed up and began my journey, with nothing more than a simple carpentry hammer, a fedora, a block of cheese, and some booze. Dredmor was powerful and an evil villain; I didn’t need to know any more than that.

The grate closed behind me as I entered the first level of the dungeon. I was stuck. The denizens wasted no time in assaulting me. Out of the corner of my eye, I perceived motion: a shadow moving close to the ground.

The sentient vegetables are the worst.

Then I heard something, the enraged cry of a diggle, a fiendish monster that is a cross of the worst parts of a penguin, a woodpecker, and a wolverine. My Viking instincts took over and I charged the monster, swinging my hammer with all my strength. My hammer crashed and I heard the crunch of bone, but the diggle didn’t fall. Pain seared through my hip as the diggle’s claws slashed me.

I have no magical prowess and relied on funneling the enemies to defeat them.

Then something peculiar happened: the diggle stood and waited for me to respond. It was as if time stood still. I swung my hammer once more and crushed the poor thing.

Fighting toe-to-toe with an entire Monster Zoo takes a while.

And thus I became a dungeoneer. I encountered a number of monsters throughout the dungeon. Everything from diggles to slimes to golems to elementals to sentient vegetables bent on my destruction. Occasionally I would come across “Monster Zoos”, rooms full of monsters of all types that only the most stalwart can overcome. I overcame them all through careful use of my food supplies and bottling the enemies up so that I could take them on one at a time.

Do not be afraid to turn tail and run...

I cleared one room after the next, one floor after the next. I was methodical in my approach: I scoured every floor for any magical artifacts that might Belong in a Museum, or would aid me in the defeat of Dredmor. My confidence with Mace and Shield swelled and my Viking focus increased as well.

...because Death is final.

There was always a sense of danger. Often I could feel my heartbeat in my hands. Often, I could block all of the physical attacks of the dungeon’s denizens, but their magical attacks pierced my defenses. I also had to watch out for traps of all kinds which littered the floors of the dungeon. The lure of gold and magical artifacts was tempered by caution: any moment may have been my last.

I kept my spirits up by tithing to the Lukefish God, collecting gems and metals for forging new weapons and armor, drinking plenty of booze, and engaging in random silly behavior. Perhaps it was a side effect of dungeon mold, but I found myself constantly making jokes to myself.

But your deeds will live on.

At some point I reached Lord Dredmor’s lair, a lava-filled black temple. I fired my crossbow and threw all of the Holy Hand Grenades that I had found. I swung my hammer with all the force that I had, but it was for naught. His powerful spells pierced my armor and overcame my resistances. He laughed as I crawled away, utterly defeated. He is just around the corner now; I can hear his skeletal feet scraping along the ground. My end will come swiftly.

Know this, if I could do it all again, I would. Do it all just for one more chance to defeat Dredmor.