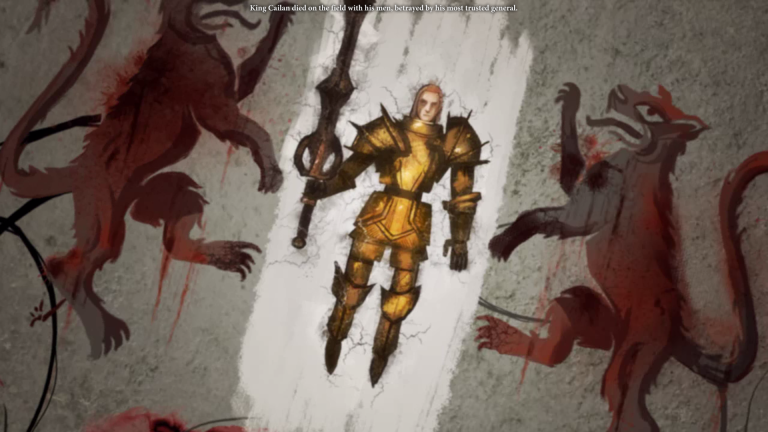 Note: this post contains video and images of graphic violence from an M rated video game. As well as potential spoilers for the first few minutes of Dragon Age 2.

The player's avatar, Hawke, a bit bloody after a run-in with some darkspawn.

It’s been a big week for all the gamer geeks out there! Two big sequels of the year had playable demos released: Total War: Shogun 2 and Dragon Age 2. I can barely contain myself, as I’ve been a Total War junkie since, well, Shogun way back in 2000. And Bioware’s role-playing game excellence is second to none, so I leaped at the chance to get my gaming mitts on the Dragon Age 2 demo. I’ll start with Dragon Age 2, and hopefully get to Shogun 2 tomorrow. I want to tell you about five minutes of Dragon Age 2 that rock.

(If you can’t see the video player above, you can also check out the video on my brand-spanking new YouTube channel.)

The story of Dragon Age 2 is once removed: a story told by this dwarf with a manly amount of chest hair. You can't see it so well in the video because of the compression and that I had to drop the graphics a bit, but it's there.

The story begins with an unknown dwarf being dragged into a dark room and thrown into a chair. A heavily armored woman begins interrogating him, asking him about the origins of the Champion, who just happens to be the player’s character, Hawke. The dwarf, complete with a manly amount of chest hair, agrees to relate the story of the Champion’s rise to power.

And then the player takes over as Hawke as the dwarf tells the story.

Mage Hawke unleashes a devastating Cone of Cold spell on a swarm of darkspawn. Frozen enemies are more vulnerable to powerful smashing attacks.

The gameplay begins with Hawke and a sibling surrounded by a swarm of darkspawn. The darkspawn fall easily before Hawke’s might, be it in the form of clever backstabs as a rogue, massive fireballs as a mage, or by huge sweeping attacks with a warrior’s two-handed sword. Each attack the player makes completely obliterates the enemies, hacking off limbs, slicing torsos in half, and causing entire groups of enemies to erupt into geysers of blood, Kill Bill style.

Hawke goes toe-to-toe with a vicious ogre while her sister throws fireballs at it.

After beating back a few waves of darkspawn, a mighty (drooling) ogre appears and attacks. Its horns and claws aren’t too bad though, and when it falls the player is rewarded with an awesomely brutal finishing sequence, which differs depending on the player’s chosen class: as a mage, the player rips the ogre apart with sheer strength of magical will, whereas the warrior leaps onto the ogre and impales it with an eight foot sword.

With the ogre slain, the swarms of darkspawn prepare to resume their assault, only to be halted by a dragon’s roar. Up on a cliff overlooking the battle, a dragon reveals itself and swoops onto the battlefield, spewing flame everywhere.

Hawke finishes off the ogre in a spectularly bloody fashion. But that isn't quite how it happened.

It’s right at this moment that the interrogator interrupts the story, “Bullshit! That’s not what really happened!”

The player is then put back into the real story, where Hawke has only one starting ability and more companions, but the darkspawn are now considerably harder. The player will also run into the ogre again, but this time the fight is much less one-sided and the ogre puts up quite a nasty fight.

Dragon Age 2 brings back the traditional RPG party style combat. And it looks great doing it. Look at that fireball!

This first five minutes of Dragon Age 2 rocks for two reasons. First, from a storytelling perspective, it’s great that the designers decided to play with the idea of the story not lining up with the facts. The exaggerations make the hero seem larger than life and completely unstoppable as they cut down swarms of opponents; it’s quite reminiscent of descriptions of heroes in classical literature like The Illiad or The Aeneid.

Do you decide to put the Templar out of his misery, make his wife do it, or ask his wife what to do? Player choices affect the world, characters' lives, and Hawke's relationships.

Second, from a gameplay perspective, it’s awesome that the player immediately gets to play with some of the abilities of the class that they have chosen. This helps the player to make a better decision about whether or not a class is going to be fun, without having to play several hours to get some of the basic abilities. You just jump in, play the introduction sequence as a class, see if the animations and abilities are cool, and continue if they are or choose another if they aren’t. Obviously you only get a handful of the possible abilities, but it’s nice to know that it’s there.

The story of Dragon Age 2 is told primarily through in-game cinematics and conversations, but parts of it are told through highly stylized animations. There were only a couple in the demo, but both were impressive and I look forward to seeing more of them come release.

Finally, these 5 minutes pulled me into the story: Who is Cassandra? Why is she seeking Hawke? Who is this dwarf? Can I trust him? Why am I so fixated on how hairy his chest is?

I’m impressed with the Dragon Age 2 demo. It’s perhaps an hour of gameplay, but it gives the player a good sense of the feel of combat system, which I know that many gamers were concerned would be “dumbed down” from Dragon Age: Origins, a fear which I found ungrounded. The demo also gives a brief introduction a few of the characters, and hints at the larger story.

The only thing that I didn’t like was the desolate environment: the sky is a pale pink, there is no vegetation, and the ground is mostly dirt. It’s a little disappointing that the player’s first encounter with the world is such a drab environment. I can only hope that this is to contrast of more exciting environs later, in the same way that Act 1 of Diablo 2 is boring, but each act after it becomes progressively more visually stimulating.

While it remains to be seen if the entire game lives up to the hype, but so far I’ve been pretty impressed with how Dragon Age 2 handles. I wouldn’t expect anything less from the company that brought Mass Effect and the original Dragon Age: Origins. I’ll definitely be on my own rise to power when the game is released this Tuesday.