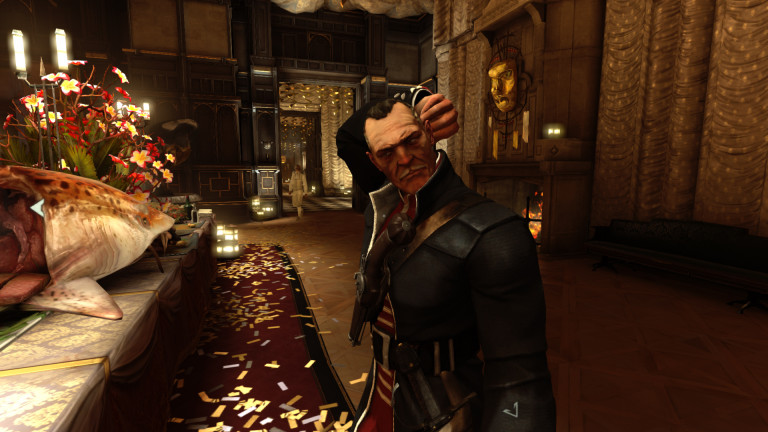 This post contains super-minor spoilers for Dishonored. But you should have already played it by now, right?!

Last night I came to a series of realizations as I indulged in some amazing Dishonored action.

Realization 1: I want to be a good person

Dishonored is unique as far as action games go for one very important reason: the player can complete the game without killing anyone. That’s right: in a game where the player plays a bodyguard-turned-assassin-with-a-badass-mask you don’t have to kill a soul. There are a few places where you “deal” with your enemies in a way that isn’t particularly nice and nonviolent, but no one has to die by your hand.

Stealth games often allow for this kind of flexibility to some extent, such as the original Deus Ex, but I don’t know of any other games that can be completed without any lethal actions at all.

This is a stark contrast to a fairly standard paradigm in action games where you cannot advance from one area to the next until every single breath of life has been violently ripped from your foes and tossed on the ground and crushed mercilessly, regardless of what your character’s motivations or objectives are.

I started playing Dishonored when it first came out, but I couldn’t really get into the game and gave up after the first couple of missions. Then I picked it up again over the weekend and I’ve been having a blast. My new mission: I’m not allowed to kill anyone and I have to avoid as many enemies as possible.

Realization 2: Being good is hard

Not being able to shed any blood has made the game quite a bit harder. It has also made the entire experience much more emotional. Let me explain. I have basically a few options when confronted with enemies:

City Watch soldiers need to pee a lot. It’s a convenient time to knock them out.

The first option is best, but sometimes there are too many soldiers around and I have to get my hands dirty. The second option is best when a single enemy has isolated themselves from the group. Sleep darts are great when I accidentally turn a corner and bump into someone who has it out for me. And sometimes I just have to turn tail and run away as quick as possible and find a dumpster to hide in (no really, dumpsters make great hiding spots).

Enemies that I have rendered unconscious are highly vulnerable to death. If they happen to flop into some water they drown; if they fall more than a few feet they crack their skulls and the resulting fractures cause them to bleed to death. Yesterday an enemy that I had incapacitated with a sleep dart slid off the roof he was standing on and his life ended with a violent splat on the ground some fifty feet below.

I reloaded my game and tried again. This time, I sneaked up behind him and choked him. He didn’t seem to be falling off the roof this time, and so I turned to continue my journey. As I heard another enemy approaching, I saw his body slide off the edge again.

I reloaded again. This time I carefully put his body on the peak of the roof, so he would be equally balanced and not fall to either side.

Realization 3: I am a horrible human being

Wow, if only I could steal that stained-glass ceiling.

But that wasn’t the key moment for me that inspired me to write this post.

That particular moment happened at a fancy dress party for Dunwall’s nobility the night before. Each guest wore a mask to hide his or her identity; an optimal situation for an assassin, even one who is committed to nonlethal methods. I was sent to try to infiltrate the party in order to eliminate the hostess to weaken the corrupt Lord Reagent’s hold on the city.

Why hello there Mr. Whale!

Well, I robbed the place blind. I casually mingled with the nobles, then slipped in behind each and relieved them of their oh-so-heavy coin purses. With the guests’ loads lightened, I turned my eyes to the wealth of the hostesses and started to pick up valuables scattered around the party floor, such as metal sculptures of whales and exquisite wines.

The other guests noticed me, but they egged me on and encouraged me to steal even more, as the hostess’ family was incredibly wealthy and they were jealous of it. I decided to help them out.

With the main floor cleaned out, I turned my attention to the upper levels of the mansion, off-limits to regular party goers, but nothing that a top-notch assassin couldn’t handle.

However, as I tried to sneak upstairs, I was confronted with a rather unpleasant guard. In order to to look less guilty, I decided to inspect the kitchen and cellar for hidden valuables.

The kitchen hands were bustling around the kitchen. There was a hare with a garnish of carrot, green jiggly jello, and a gigantic fish ready to be served. I greeted the serving ladies and then ducked into their adjoined private chambers.

As a reflex, I closed the door behind me and opened the cabinets. Instead of piles of gold or fine wines, there were a handful of coins… that I put into my hand. I was about to leave, when I noticed a slight sparkle of silver on the bed itself. I plucked the coin and proceeded on my way.

I stole a handful of coins from the underclass. That wasn’t very nice of me.

And after that, I immediately felt awful: I had just stolen the modest savings of Dunwall’s underclass. Then I sat there and had to think to myself, “Is it any more wrong the the thieving I had just done upstairs?” Surely, the nobles might be able to recover the loss of a few precious possessions and the underclass could not, but did that make it morally acceptable to steal from the nobility, even if for a good cause?

I decided that it was wrong in both counts and that what I did with the wealth didn’t matter. I felt bad for all of the thievery that I had just done…

But… I didn’t feel so bad that I wouldn’t continue my kleptomaniac spree. I went upstairs and stole a half-dozen pearls that were as big as my hand and a beautiful portrait from the gallery.

All in all, a good haul.

What do you think Mr. City Watchman? Is stealing okay?

There was nothing forcing me to steal from anyone at the party. I didn’t even really need the money to continue the game, but I chose to do it anyway because it would make the rest of the game a little easier.

Because of this decision, my healthy role-playing imagination combined with my libertarian understanding of property rights and produced a feeling of guilt.

This moment crystallized this final realization: actions done by the player have no moral weight when the player has to complete the action in order to advance the game; any moral compass that the player has is either turned off (“It’s just a game”) or turned into frustration (“Why do I have to do this?”). But when something is completely optional, then the player feels the moral weight of their decisions because they elected to partake in that particular behavior.

A good example of this is the final scene in Mass Effect 3, where the player decides the fate of the galaxy by choosing door A, B, or C. Many players hated the fact that Shepard had to choose among these three options, each of them morally reprehensible on some level. They wanted an out, a way to refuse to choose, and Bioware gave it to them in the form of an ending that is quite literally “And then they all died.”

But the player gets to choose, which makes all the difference in the world.

P. S. Another good example is sex scenes in games, which are (almost) always optional. Check out my article on Sex, Love, and Video Games.