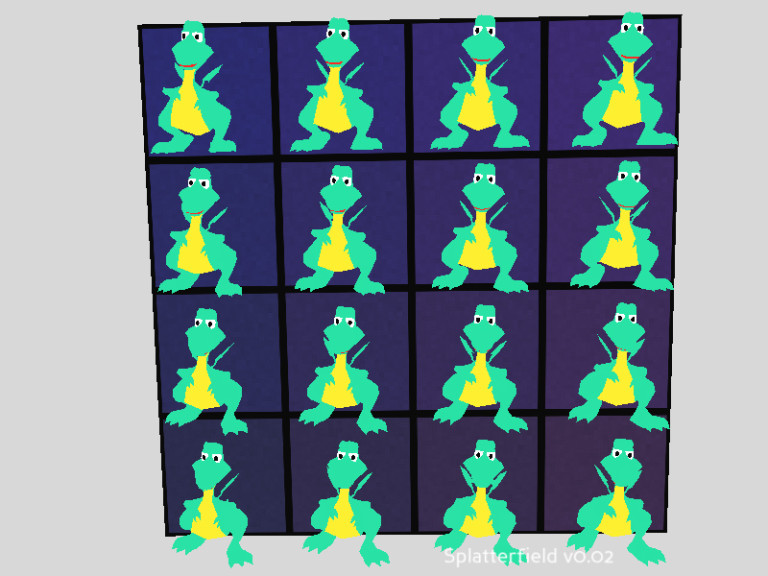 So I’ve been thinking a lot about the Minecraft / X-COM hybrid game from my last post. How the game should look, what I want the player to feel about the game world, what kind of customization the player should have over their troops, and even what to call the game. It’s all been swimming in my mind.

What’s in a name?

I don’t know what I should call the project (or how far I am actually going to get with it). The best name I have come up with so far is Splatterfield, but that doesn’t encompass the creative aspect of the game very well. I’ll probably use this until I come up with something better. Mostly I just needed a name so that I could refer to the idea easily.

My goal for the art direction would be to highlight how humans interact with their environment, in this case by placing, moving, and destroying blocks with high-powered weapons. The muted background would take a backseat to the colorful characters.

The blocks world be rather muted in color, not greyscale, but fairly close. The grid of blocks would probably not be visible, at least by default. Each block would also have a defining combination of symbol, texture and color to let the player know what kind of block it is. Damaged blocks would have a slightly less muted presence than their undamaged counterparts, and destroyed blocks may leave rubble in their wake.

The characters would then be brightly colored. This would make them easy to see on the battlefield and emphasize their role as agents. I would love to have the characters explode into vibrant rainbows of color when they expire, splattering blood onto nearby blocks and creating a record of how each soldier within the battlefield died.

Similarly, each shot fired should leave some evidence on the map itself. Whether it is tiles that completely obliterated, scorch marks, or a deep pit where a shell landed, I want players to be able to see the power of the tools at their disposal. And I want them to feel as though the weapons are so powerful that they are almost out of control.

The reason for this is that I want the players to feel powerful while playing, but also so that players can look over the battlefield at the end of the game and pick up visual cues to remember how the battle went. I’d like to provide the ability to save the final battle map, with all of its construction and destruction to some kind of image file as well. It be a collaborative work of art.

The world itself would be the story of the battle.

Ideally the tile sets used would be modable as well, much the same way that Minecraft is. However, this wouldn’t necessarily be a high priority for me, since I’d rather get the mechanics solid first.

The new XCOM forces players to make tough decisions about how to equipping troops.

Another thing that I’ve found to be highly compelling in games is personalizing my avatars. It seems silly, as it almost never affects gameplay in any way, but giving my soldiers names in X-COM makes them much more special to me. It’s hard emotionally to lose Col. Bob that you’ve had on your team for fifteen missions, but I wouldn’t care if I lost soldier #3.

It gives you a sense of ownership as well. Players could create teams of soldiers, giving them names and adding color to their armor, their weapons, the residue left behind when their weapons are fired, and for their blood for when they explode (see above). You then save the team and load that team into any multiplayer battle. This would make it easier to try new strategies and slowly refine your team. The team members would be persistent from one battle to another, but it might be nice to keep track of how many times each soldier has died.

I took a look at the inventory systems for the original X-COM: UFO Defense, the reboot XCOM: Enemy Unknown, and Minecraft for ideas about how to organize the user-interface for the individual soldiers.

The original X-COM: UFO Defense made items that each used up a certain number of squares. Soldiers had slots on their shoulders, hands, legs, belts and backpacks, but could also be weighed down if they had insufficient strength for the amount of items that they were carrying. Overall, I think the system is okay as it allows for a wide range of flexibility, but I would be concerned that it would make outfitting a bit too complicated. While it is neither here nor there, the original game also didn’t save loadouts very well, so you had to re-equip each soldier for each battle. Ug.

Minecraft uses a fairly simple inventory system: you have a toolbelt for quickly accessing frequently-used weapons and blocks, and then a backpack in which you can store up to 1728 cubic meters of solid stone (it has 27 spaces for items, with many items stacking up to 64 units). While I think that this works fine for Minecraft, it would be excessive in Splatterfield. I don’t see a player ever spending all of their turns picking up blocks until they hit some arbitrarily high number of blocks or packing in so many weapons. It just doesn’t seem like a good fit.

My thought would be to have something along the lines of the new XCOM. Each soldier has a few slots where different items can be equipped: armor, sidearm, primary weapon, and utility slot. While I like this system, I think that I would change it to be just a bit more flexible.

Each character has four slots to put any number of:

Each slot used would also decreasing movement and action potential slightly. So, if I wanted to equip a soldier with both a mortar and a laser I could, but then they might not be the best candidate for hauling a ton of blocks around or would be walking around without armor on.

My goal for the customization decisions is to empower the player to be creative. Do I want to specialize my forces or send out a balanced team? Do I want 7 mortar troops and 1 lightly-armored spotter? Should I equip all of my soldiers with pickaxes and tunnel toward the enemy? Or shall I just load everyone up with basic weapons and as much stone as they can carry, to constantly build cover as I approach?

Anyway, that is some of what I’ve been thinking about over the last couple of days. I’ll continue to think this one through and then develop a programming strategy, as I think that it would be awesome to get some kind of working prototype going.