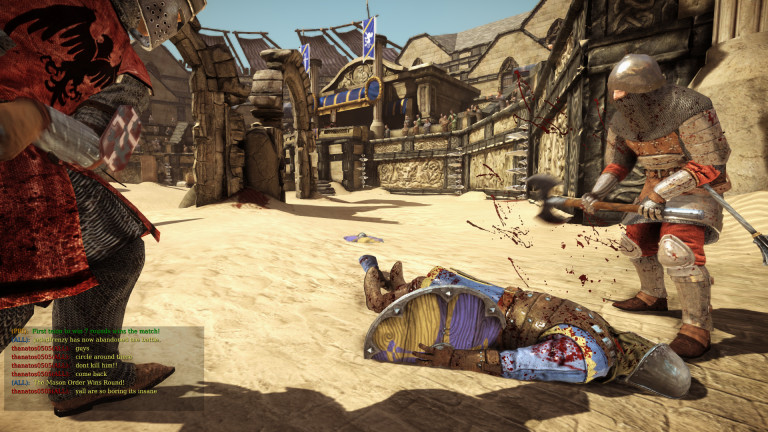 Chivalry | It doesn’t seem to have any

This post contains graphic images of dismemberment. But not very many because I didn’t take many screenshots last night.

Yesterday I watched several Let’s Play videos of people playing a new game called Chivalry: Medieval Warfare. Chivalry is a team-based multiplayer battle game, but with a focus on hand-to-hand weapons instead of firearms. The slash and parry swordplay in the videos reminded me of the Mount & Blade series, so I decided to give it a try last night.

I proceeded to get decapitated over and over again.

Chivalry features four classes: Archer, Footman, Vanguard, and Knight. Each class has three slots in which to equip various weapons, which have various characteristics of range, speed, and damage, with more weapons available as unlocks.

These choices will affect how easy or difficult it is to combat the other classes. For instance, if you are playing the Footman, a fleet-footed warrior, but the other team is loading up on archers, switching out your throwing axes for a shield will help you deflect their attacks as you move for a flank attack.

THIS IS CAKETOWN! Kicking can put your enemies off balance, and throw them off ledges.

Once you have your weapons, you’ll be thrown into the fray, and it pleases me to say that the fighting is fast-paced and satisfying.

When you see the enemy, you have to make a number of decisions. The first being: should I bother to engage? Running into a swarm of enemies yelling a battle cry may feel like the right thing to do, but retreating and luring the enemy into a trap might help your team more in the long run.

I went through the game’s training, but I still got destroyed online.

But at some point you’re going to come to blows with an enemy warrior. And it is this interaction where the core game mechanics shine. Your attacks are directed toward your cursor and will inflict considerable damage, even on heavily armored knights… but only if they connect. Most weapons allow you to perform a basic slash, a one-two slash, a lunging thrust, or a powerful overhead strike. In addition, you can also try to push or bash your enemy with your shield, or do a fake attack (a feint) in order to get your enemy to block too early, allowing you to go in for the kill.

I tried my hand at being a light skirmisher and experienced some success. It would help if I could block an attack within 5 seconds of throwing a javelin.

These core mechanics are quick fun to play with, as it adds a layer of skill and makes the player that just clicks the left mouse button faster not necessarily the winner. This is especially true during tight group battles as careless swings will wound or kill your allies. So swing with care! (Or don’t care.)

The blue knights always triumph! Have at you!

The sound of parries fills the air punctuated by the screams of the dying and the victory cries of those who have had the fortune to not quite die just yet. The violence is in vein of Braveheart: limbs get hacked off, arrows whiz through the air and lodge themselves eye sockets, and heads roll (which is particularly hilarious when you are the one who just was decapitated as you see what your rolling head would see).

One thing that struck me was the variance in quality in the level design. There are several beautiful outdoor maps that are an absolute blast to play, but there are also a few maps (most notably one in an arena inspired by the Colosseum), that feel rushed and claustrophobic, severely limiting tactical options and favoring the heavier classes.

Why, those men over there aren’t fighting at all. They’re just lying down.

All of this being said, there are a number of things about the game that show a distinct lack of polish. I’ve found myself completely stuck on rocks several times and stuck in mid-air twice (only to be released by having my face smashed in with a warhammer). These don’t make it impossible to enjoy the game, but they do make it more frustrating since no one wants to lose on account of bugs. I can lose on my own, thankyouverymuch.

I also experienced some cheating earlier today as well. A player was using the heavily-armored knight class, but zipping around the map quite fast and crushing everyone. Luckily he was soon kicked from the server.

Chivalry has some good maps, but the balance leaves a little to be desired.

I haven’t quite made up my mind about this game. It seems fun, but I also worry about the long-term balance of the game. As players get better, I wonder how the metagame will evolve.

On the one hand, it is a unique take on multiplayer battles and I haven’t played a better close-combat game. On the other hand, it is somewhat buggy and the balance feels wonky. That might just be due to the fact that I’ve only played a couple of times. I’ll have to give it a bit of a chance, maybe play with my buddies.