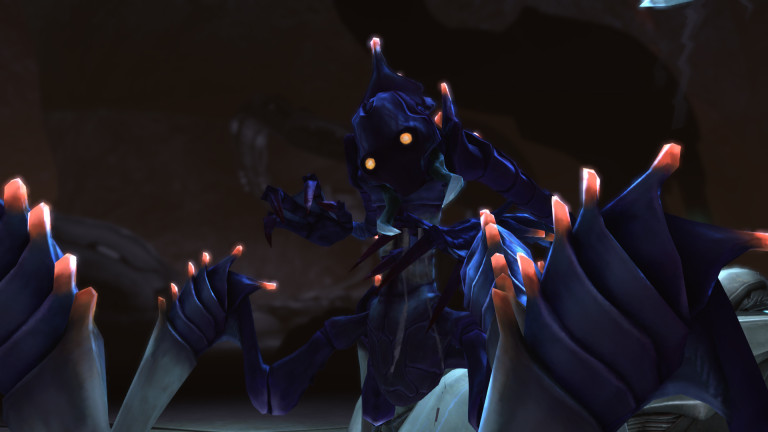 The last time I tried to assault the alien base in XCOM: Enemy Unknown, it ended in spectacular failure: my entire squad was turned into zombies.

But I recovered. I learned from my mistakes. I hired more soldiers and sent them out on some easy missions for them to get their feet wet. I researched laser weaponry and armed them with new toys including a light plasma rifle that I had procured from an alien. I knew what I was up against.

I was resolved to assault the alien base again and avenge the first team that had fallen to the chrysalids.

I think that the game actually gives the game the same operation name, but I think it really should have been Operation Morbid Shield 2, to give the soldiers something to think about during the mission:

“Hey Joe, why is this mission ‘Two’? What happened to Op. Morbid Shield ‘One’?”

In any case, as my new cadre of soldiers plummeted into the darkness that had swallowed up my A-team, I wondered if I was making a horrible mistake.

I was determined to not make the same mistakes as before. Three of my soldiers had laser rifles and I packed more grenades than I had on my previous attempt. I didn’t have as many experienced troops (they all died in my first attempt), but I knew what to expect this time around. I was going to move with extreme caution and not get killed/impregnated by chrysalids.

Or at least, that was the plan.

Things opened up better than my first attempt. The first few packs of sectoids were dropped with concentrated firepower, with only one soldier taking a grazing shot to the shoulder.

The first group of chrysalids went down much in the same way that the previous attempt at the mission: I softened them up with a grenade and then finished them off with a rocket to their collective faces. No casualties. Imagine my relief.

Things started to get hairy at the same point where my troops wiped on the previous round: after opening a door and revealing three more chrysalids.

My troops had taken position behind five large pillars (two in the front, three in the back), with one assault trooper opening the door. I hadn’t known what to expect, but my forces were spread around the room in a way that I thought would work against the beasts.

My assault ran back a bit, then threw a grenade into the hallway, wounding all three of the chrysalids. A support missed their shot, but my heavy shot one of the arms off the first chrysalid and it went down to a well-placed shot from my sniper.

My second assault managed to get a solid laser hit against the second chrysalid, but then the two remaining monsters leaped through the doorway and immediately ate my point man and turned him into a zombie. The second chrysalid charged to the right side of my remaining troops, toward the pillar that protected my medic. The medic, knowing that his life was over, ran as far as he could to his right, so that his zombified body would take longer to threaten his teammates. His heroic sacrifice will not soon be forgotten. Either that or he panicked and wanted to get out of there as fast as possible. I’ll go with the heroic interpretation.

The chrysalid then ripped him to shreds and planted a baby chrysalid into his still-warm corpse. Ew.

The envy of the world one minute, shuffling zombie the next.

As the zombies of their former companions rose and started shuffling toward my remaining troops, I knew that I had to play the next turn absolutely perfectly.

I chose to have all of my troops retreat to the back-left corner of the room and huddle together in fear. My thought was that this would maximize the amount of damage that my troops would deal, and there was no reason to constrain myself to cover, since this time I was only engaging the chrysalids and zombies, and those enemies don’t have any ranged attacks.

Each soldier moved as far as they could while still taking shots at the remaining chrysalids. My heavy finished off the chrysalid that had killed the assault on point, and my remaining scored a solid against the last chrysalid. My remaining two characters missed their shots.

I prepared for the worst. The final chrysalid ran from the other side of the room and the two zombies shuffled closer. The chrysalid was literally a square away from my support (“Fast Lane”), who then promptly emptied a light plasma rifle round into the chrysalid, killing it.

Things were looking up, except that there were still two zombies closing in and my soldiers’ weapons were running out of ammo. Fast Lane found himself face to face with the re-animated body of his former squad mate. He fired immediately and wounded the zombie, but Luc Richard, our resident sniper-in-training, wasn’t able to finish off the monster with his pistol. Fast Lane was brought down with a powerful swipe from the zombie that was so recently my assault.

With their weapons reloaded, my team cleaned up the the last two zombies and sat in the corner, panting and bleeding. Three of my soldiers had been killed, leaving me with an assault, a heavy, and Luc Richard, the sniper. They sat for several rounds, trying to gather themselves and assess the situation.

They could have retreated, but that would have left the alien base still operational. They knew what they had to do.

I knew that I must be nearing the end of the mission. I would weather the casualties and press on.

My three remaining troops passed through the doorway that had unleashed hell. They ran straight into a trap.

Multiple sectoids had an elevated position on the entry on the right side of the room. They sat behind light cover on platforms having what must have been some kind of alien tea party.

My ran up a ramp and took cover behind a small wall in the center of the room, then blasted the closest sectoid. My heavy followed suit, taking up position right next to my assault. My sniper took a shot at the second sectoid, which promptly turned into a spray of green blood.

The final sectoid retreated slightly, then hid behind more cover. As my sniper (Richard) pursued, a group of thin men appeared. Richard took the elevated position and finished off the sectoid, but not before it fired one final round and killed my assault. My heavy then fell to the hail of plasma from the thin men.

Richard was the only one remaining.

He took his time. Waiting for the thin men to reveal themselves before firing and revealing his position. One shot and the first Thin Man went down. The second took a shot but succeeded only in blowing up some of Richard’s cover. As Richard repositioned on the ledge to remain in cover, the sectoid commander showed up.

This was clearly the final boss of the level. Luckily, he was far below Richard and a fair distance away. I didn’t know what powers the commander might have, but judging from the tutorial I assumed that he might be able to mind control Richard.

One on one. An ill-trained sniper versus a mind-controlling alien. Classic deathmatch.

The commander assaulted Richard with both his mind and his plasma gun, weakening his resolve and severely wounding him. Richard panicked for a moment, then rebounded and returned fire with his sniper rifle, scoring a big critical hit on the commander.

It ended like this: Richard had two shots left in his sniper rifle and one hit point left. His hands were shaking and slick with blood. The sectoid commander had a few life and was still below Richard. Richard had essentially one shot to finish him off and needed to score a critical hit. He aimed for the head and fired.

The bullet soared straight through the commander’s bloated head, bringing it down instantly.

Richard called in that the base had been neutralized, then sat down on the ledge and waited for additional troops to arrive to secure the base.

One thing that I definitely had working against me during both of these attempts was my misunderstanding about how alien bases work. I was thinking about how the bases work in the original X-COM: UFO Defense; aliens create bases periodically throughout the game and it behooves you to assault them sooner rather than later.

I didn’t realize that there was only one alien base to assault, and that (as far as I know), it doesn’t matter when you assault it. The number and type of aliens may change slightly, but that’s about it.

Maybe if I had waited, my second batch of troops would have faired better.

What struck me most about the mission was how close it ended up being. Quite literally: one soldier left, one shot to finish off the last enemy, one life left. It doesn’t get any closer than this.

Luc Richard was a true hero. He had finished the mission despite being gravely wounded and psionically attacked. All of his squadmates had fallen. While in the infirmary, he must have suffered horrible nightmares from his experiences, so I gave him the call sign, “Nightmare.” I imagined that he would become my best soldier, leading the squad to countless victories over the alien swarm. He would stay in the back, sniping alien leaders and bringing the entire invasion to its knees.

Awesome story! It’s like going through a short movie when you play one of these missions. One of my favorite moments in my first playtrough was something like this:

Mid game mission, some of my best operatives on the ground (main stage: Odyss the fearless assault captain, and his partner and love, Felicia Weiss). It was a grueling fight that turned nasty in the end with a horrible ambush by several mutons, and a cyberdisk. After the enemy mowed down mostly everyone and only 4 of my squad (initially 6) was left, wounded and bleeding, a muton berserker suddenly charged miss Weiss and in a hollywood moment of slow motion knocks her down to the ground, bones crackling blood spewing, she lays critically wounded. At this point in time my captain goes into an all out rage and starts dishing out critical hits like never before. With 3 turns left until his love bleeds out he recklessly jumps out of cover right into the face of the muton berserker and sends it back to hell. After taking a hit and a miss he Finishes off the cyberdisk with barrage of double rifle shots. The third squad mate takes a hit to the face which decapitates him. Left alone and with one chance to save the girl, our Captain and commander goes all in and finishes of the last remaining muton in spectacular blood bath sending green ooze flying all over the place. Victory! Mission complete – heavy casualties.

This type of victory is the best: where everything is so close, everything down to the last: the last soldier, the last shot, the last hitpoint, the last turn. That’s what I love about XCOM: you are almost always one group of enemies away from having serious trouble on your hands, and potentially, a memorable victory! The drama is palpable!

XCOM: Enemy Unknown (and the original too!) are awesome environments for this kind of emergent, player-created stories. I love both of them.