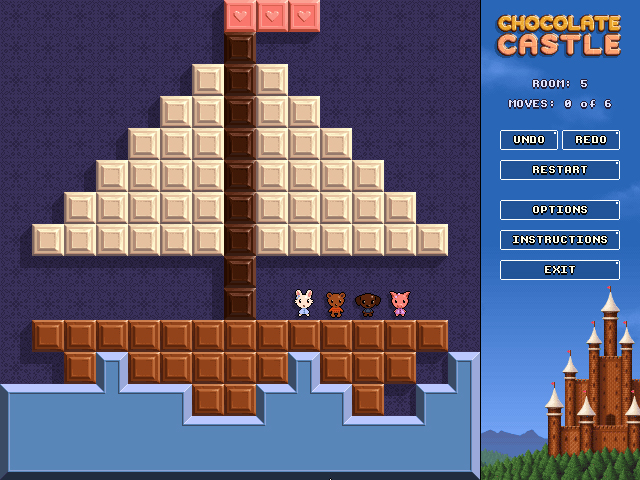 Chocolate Castle | What is cuter than a kitten eating chocolate?

Some of the early puzzles are more pictograms than puzzles, to help you get your feet wet.

When I purchased the Humble Voxatron Debut a couple of weeks ago, it came with a puzzle game known as Chocolate Castle, by Lexaloffle. I hadn’t heard of it before, so I decided to give it a try.

Other puzzles are clear references to other culture icons, such as classic arcade titles.

Whenever two like-colored blocks of chocolate meet, they cannot be separated. This can be handy for limiting the number of moves that you need to solve a puzzle and to get a new personal best, but they can also put the puzzle into an unsolvable state. Fear not, as Lexloffle has included an “undo” button, which allows the player to take back any number of moves. Die-hard puzzle fanatics may frown upon this, but I would get frustrated to move 30 pieces only to have to restart the puzzle on account of a mis-click.

The complexity of the puzzles increases quickly. This one took me a few tries.

Yay! Solving puzzles rewards you with some confetti and balloons. You can even poke at the balloons to move them.

I don’t know that the game mechanics offer anything exciting and new to the genre. The action of arranging blocks based upon color is hardly a breakthrough, but what sets Chocolate Castle aside in my mind is the presentation: the game only runs at 640 by 480, but the character of the critters is nice, and it’s fun to watch the chocolate get chomped up. The music is light and heavily synthesized, but it never made me want to turn it off.

I like the game, though I don’t think that I will play it too much. I’m not huge on puzzle games, but this one does have a certain amount of charm. I can see myself playing it while another game is installing or when I only have a few minutes to play something while food is on the stove top. The game accomplishes what it is mean for: a basic, spirited, puzzle game.