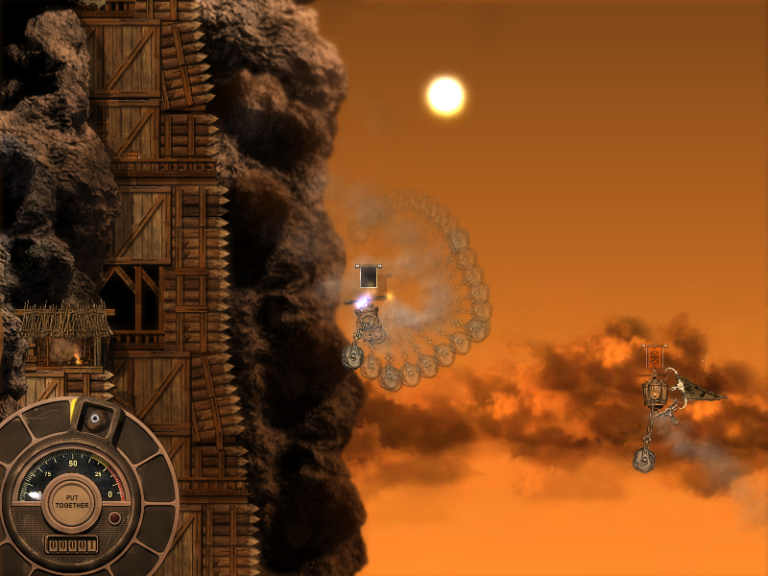 Attacking with your flail takes a bit of getting used to. In particular, the timing of the attack takes some skill.

There are still a few days left for you to grab a hold of your Humble Indie Bundle 3! As a nice little bonus, the Humble Bundle folks have added another game, Steel Storm: Burning Retribution to the bundle. Still not piquing your interest? Well, if you pay more than the average amount (about $5), they’ll also throw in the Humble Bundle 2 games: Braid, Cortex Command, Machinarium, Osmos, and Revenge of the Titans.

The last couple of days I’ve spent some time playing Hammerfight, one of the games in Humble Indie Bundle 3, and I have to say that it is my least favorite game out of that Bundle. Hammerfight was developed by Konstantin Koshutin and published by KranX Productions.

My ally's battle commentary made me laugh a few times... but that didn't make up for him constantly getting in the way.

The premise is this: the player pilots a flying machine armed with medieval weapons, such as swords and flails, and must defeat his or her enemies by moving the mouse in specific patterns that build momentum and allow the player to strike enemies with the most power. For instance, when attacking with a flail weapon, you must go in circles to build momentum and then time the attack just right to deliver a powerful blow onto the enemy.

While this sounds like fun in theory, I found the game quite difficult and frustrating to get into. The first couple of tutorial levels were fine, but then I was dumped into a chamber full of worms, where I had to defend myself for something on the order of 3 minutes. I used it as a learning experience, but must have played through the first 2 minutes and 30 seconds ten times at least. When I finally did beat the mission, the next level was bugged and I was not able to proceed. I then replayed the tutorial and the worm level again, yet again it bugged out and I was unable to proceed. Grr.

Once you get the flail spinning you'll be good to go. Just be careful not to get surrounded by worms.

One reason that I failed the first real mission so many times was that it is difficult to see where the background ends and the foreground obstacles begin. Because I was swinging a rock around as a flail, if I was too close to an actual wall, the rock would strike the wall and lose all of its power. There is nothing more frustrating than slamming your vehicle into the wall and then getting eaten alive by giant worms. Once I got the hang of swinging my rock around, the biggest issue was not the worms trying to eat my face (or propellers), but rather the friendly flying machine getting in my way and striking me with his hammer.

Finally, after 12 attempts... I beat the second real level...

I think the main problem I had with the game is that it just doesn’t feel like it is balanced properly. Getting your weapon going takes a bit of time, and if you don’t have it ready then you get overwhelmed by the enemy. If you do have it swinging, then the enemy can’t touch you and you simply hit an enemy and then retreat until you have momentum again. While it makes sense from a physics perspective, it makes the gameplay less exciting to hit once and then retreat every time. There was no reason to press the attack. Perhaps the other (non-flail) weapons are better suited to this style of gameplay.

...only to get stuck here... twice. If there is something I'm supposed to be doing, it isn't clear and I found it very frustrating.

Between missions, there are small bits of poetry as well as dialog among characters, but the text is so small at my screen’s resolution (1920×1080) it is almost unreadable. What dialog I did manage to read through squinting eyes wasn’t particularly stirring or inspiring, and occasionally it was downright laughable.

The game isn’t really my cup of tea. I think there is definitely potential for a game to use this sort of physics-based fighting, I found its execution lacking and the learning curve too steep for it to be enjoyable. I love the concept, but I just could not get into the game and the bugs prevented me from advancing very far. All of this combined with a weak story and poorly designed graphics make Hammerfight a game that I am not going to go back to.

Finally, after 12 attempts… I beat the second real level…

As the text in the selection screen says, you chose the “hard” level instead of the easy one. And yes, it’s *very* hard, so no wonder you got it in 12 attempts.

And yes… I’ll admit that I did bring it on myself on that one. Perhaps it was a little unfair of me to be so harsh on the game when I chose the harder path. Though I didn’t ever see an option (if there is indeed) one to choose the easier path after I had chosen (and failed) the harder one.

Unfortunately once you choose the hard path you cannot go back to the easy path. Both lead to different stories, so if you want to switch lanes you have to create a new character.

Ah, that makes some sense. Perhaps I will give it a try.

The level you got stuck on contains bees, and is much harder than the worms level. I want to like this game, but it’s just too frustrating.

After I had written this, I logged into Hammerfight again and was able to get non-stuck on that level… only to get torn apart by the bees you mentioned several times.

I agree. I want to like the game because it has such potential, but I think it’s just a little too unforgiving for it to be enjoyable.