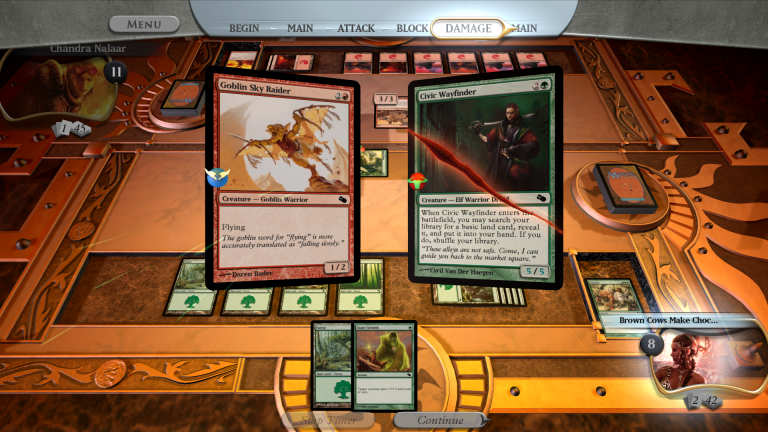 Duels of the Planeswalkers: Porting Magic to the PC… again

Happy October! Yes, it’s that time of the year again, when the leaves turn the color of orange, yellow and brown construction paper children make hand-turkeys out of.

I woke up from a late-night Civilization 5 binge and had ate my Cheerio’s knock-off cereal, and felt the need to get some gaming out of (or into) my system. I decided to try out something new and different, so I loaded up Steam and downloaded the demos of a couple of games that I’ve been meaning to take for a test play: Global Agenda and Magic: The Gathering – Duels of the Planeswalkers. I had been excited about Global Agenda for over a year prior to its release, but as it was getting close to release I lost interest. I’ll write about my experiences with GA at a later date. Duels of the Planeswalkers on the other hand, I hadn’t heard of until about a week ago when I saw it was on sale on Steam. I played the game for about an hour, testing to see if it would be something that I would enjoy playing… and be willing to pay for.

Magic: The Gathering has been around for a while. It's a great hobby, but it's expensive to keep up with all of the new sets that keep coming out.

I’ve been playing Magic: The Gathering off and on since the release of the Ice Age standalone expansion in 1995, so I was pretty excited when I saw this port. For both of you who don’t know, Magic: The Gathering is a collectible card game in which the players take on the roles of dueling wizards. Each card represents a spell that you can cast or a minion that is summoned to do your bidding. Interesting side note: later card sets removed the terminology of “summoning” creatures from the cards themselves to allay fears of the game being used as a marketing tool for the occult… or something like that. The player then chooses a collection of cards that he or she thinks will work well together and faces off against an opponent, who in turn has constructed their own deck of cards. The cards themselves are well made on good cardboard and often have wonderful illustrations; Ron Spencer & Rebecca Guay in particular have always produced phenomenal work. It’s a compelling game model because a trip to your local card store can have you facing off with potentially dozens of other decks, each with its own themes and strategies that vary widely. It’s a successful economic model because players are willing to pay the high price of the cards to add them to their collections.

I’ve loved playing magic: the smell of new cards, the randomness of not knowing whether your next card will be the card your need to stop that damned dragon or just another basic land, and the strategy involved in building decks.

There were a couple other Magic computer games that I’ve played, and I hadn’t been disappointed with them. The first, I believe was an old version of Apprentice. Apprentice was a free interface for creating decks and playing Magic on your computer. It was cool since you could play over your modem with people all over the world, though in reality I mostly just played my brother who was sitting upstairs. Still, it was great even just to use a library of all the available cards and to test out hypothetical decks. Apprentice was particularly nice since you didn’t have to pay for the cards that you were experimenting with, or any of the cards for that matter. You could build as many decks as your heart desired without paying a penny. The one issue with Apprentice is that there was no automatic rules enforcement, meaning that it was possible for players to misunderstand what a card was supposed to do, or forget to do something that was required by the card, such as paying cumulative upkeep. This wasn’t an issue if you were already familiar with the [physical] card game, but made it so there was basically no “game” to Apprentice itself.

Duels of the Planeswalkers has a decent interface, with helpful indicators to show the player what's about to go wrong with their dudes.

The second port I played was Magic: The Gathering Online. MTGO was a “more official” port to the computer than Apprentice. In MTGO the player had a virtual collection of cards that was created by buying (with real money) virtual booster & starter packs. The cards went into a collection that could then be used to create decks. The best part about MTGO was its strict adherence to the complicated rules of the card game. This made it possible to compete in online tournaments. If I remember correctly, the rules system with MTGO was flawless; I don’t ever remember an instance where the game did not enforce the rules as I expected it to. Unfortunately, the cost of playing was as much (or more) than the actual card game. This made it hard for me to justify playing MTGO since one of my favorite things about playing Magic is the smell of the cards themselves (see above). So yeah, that didn’t last too long. I played in a tournament or two the Summer after MTGO came out, won a few free boosters, but overall I wasn’t willing to put so much money into something that I couldn’t put my hands on.

Duels of the Planeswalkers had a lot to live up to. After a screen-resolution change and one absurdly placed “Back” button (in the top left corner of the screen? Really guys? Everything else is right down the center and you’re going to put the back button up there?), I was in and dueling another planeswalker through the game’s tutorial.

The tutorial was nice and slow; it led me through all of the concepts in the game that I expected it would: playing lands, tapping lands, summoning creatures, casting instants, and winning the game. Popups were helpful, if a little numerous; I felt like I was being dragged through the steps of playing the game, rather than actually playing the game. But it was the tutorial, so I am willing to forgive for that.

I really do like the minor graphical effects that are present in the game.

I went to play “the campaign” after completing the tutorial. Sadly, the campaign was simply playing against the tutorial deck but without the popups. And it wasn’t scripted like the tutorial was. The interface is clean and the playing field is nicely animated and affected by the spells that players are casting. For instance, when I cast Overrun, my side of the playing field was lit with orange and red, representing the aggression of that spell. There were other minor animations for creature combat and for spells, but for the most part the game was unblemished by extraneous bells and whistles. One thing I really liked was how the game indicated the targets of spells with directional arrows. It’s a nice, simple touch, but it helped make the game more comprehensible. It reminded me very much of players arranging their cards on the physical table. It was easy enough to get a large, screen-sized picture of the cards and their abilities, but for some reason the illustrations did not seem to be as high in quality as I expected they would be: they were often pixelated when magnified to the full screen. The only other minor criticism I have of the interface is what I don’t like the isometric view. It causes the opponent’s cards to be very small and makes it harder to see what they’re up to. Yes, you can magnify each of their cards, but I feel like if the board were straight 2D it wouldn’t be as necessary to do so.

The lightning elemental does triple damage to you if you have an Island in play. Luckily, I tend to play Green/White decks.

The computer game enforces the rules of the card game well, but there were a couple or three times when I thought that I would have one more opportunity to cast Instant spells and I didn’t. The main problem I had was the use of a game timer: about two or three seconds after my AI opponent would so something, it would assume that I didn’t want to do anything and let the spell resolve. I felt rushed and like I didn’t have enough time to react to what was happening in the game. Perhaps this is a relic of me being used to having as much time as I’d like to decide if I should use that Giant Growth to save my creatures or not, but it made me feel ill-at-ease all the same. While it was possible for me to pause the game timer and take that time, it seemed reversed to me that I had to explicitly say when I needed more time, rather than the computer assuming that I’d like to take a few seconds to think about it and then allowing me to proceed.

It burns! Unfortunately, Duels' timing system got the better of me a number of times, causing stuff like this to happen.

One thing that I wasn’t able to do with the demo is to test out the deck customization, so I really can’t make any claims about how awesome or how terrible it is. This actually upset met a little as the strategy in building the deck is at least half of the fun when playing Magic. I’m not sure what sets are available to play with, what limitations (if any) there are when playing. Can I build any deck I want with historical cards, or is the game limited to the most recent block? What about different game modes? From what I gather from Steam’s product description, it seems like there are limitations, but I’ll have to do some more research to see if the game is worth throwing down the dollars for. Until then, I’m going to stick with overwhelming the Terrans and Protoss with zerglings.

I bought this game and I can honestly say I like it. There are draw backs to this game of Magic however, the not being able to completely build your deck from ground level up is kind of annoying however, the price of the game makes it fun regardless. So definitely 2 thumbs up on this game.

Thanks for the response, Havick.

I figured that there would be significant restrictions with the deck-building capabilities of the game, otherwise how could they sell the next expansion sets? It makes sense, but I would love a Magic deck-builder that allows you to tweak a deck and test it out, without having to fork over tons of cash.